My name is Peter Salathe and I work at a Goodwill store in Indianapolis. 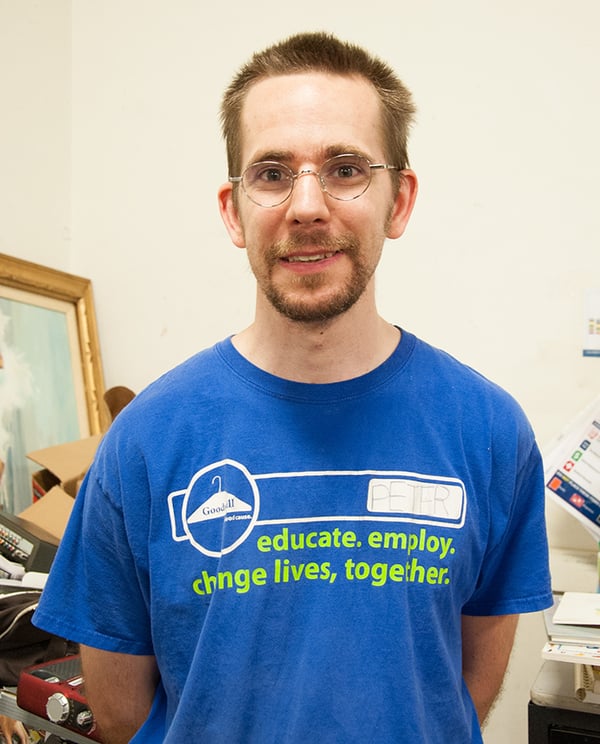 I’m 34 years old, and though I don’t look like it, I have disabilities.

The biggest hurdle has been a stroke I had when I was a toddler. It paralyzed half of my body and gave me a series of learning disabilities that are very apparent in mathematics and eye-tracking. It’s been observed that I have brain asymmetry, another physiological defect I was born with, which likely contributed to my disability. I suffer from bad insomnia followed by migraines anywhere from twice a month to a couple times a week. It’s the pits, but I've learned my patterns and now can recognize when it’s coming on, but I still have to be vigilant. My second (and third) hurdles are Asperger syndrome and Lyme disease, the latter of which I’ve had since I was 16 years old.

I’ve always felt I was different, especially with my ability to connect with others and get hyper-focused on things. It’s easy to overload my senses, especially with audio and rapidly-moving visual stimuli. I have arthritis due to the Lyme disease, but I mitigate this with regular physical activity that I must keep up to reap its full benefits, including yoga, martial arts and weight lifting.

My first job made me feel overwhelmed by the frantic activity levels. This contributed to my insomnia and anxiety and I gradually began to deteriorate. It was becoming apparent that I was likely bound for a non-productive life on social security. I believe in always doing the best I can, contributing and giving others their energy back when they’re kind to me. Being taken care of and dependent on others goes against my personality. I was at a pretty low point when my job closed down and I was afraid I wouldn't find a job that was a good fit, until I discovered Goodwill.

I took a part-time job where I was initially just putting away items from carts. Everyone is very friendly, both customers and co-workers alike, and I felt like I was contributing and helping others. Helping a person find a VGA cable for their monitor because they had a term paper due in two days and almost no money to spend really made me feel like what I was doing was making lives better. 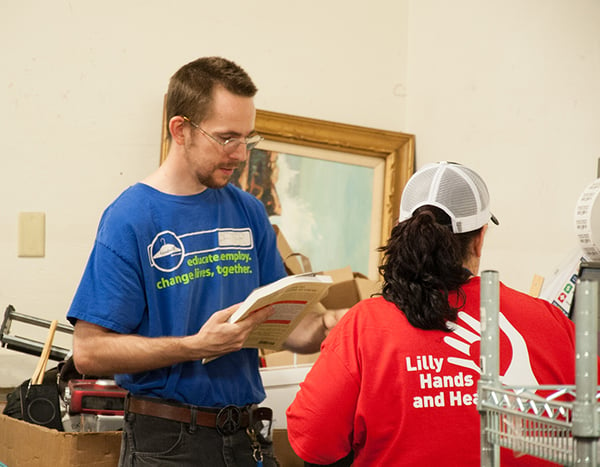 Gradually, through hard work, I was given more and more responsibilities that I handled well. I wanted to do more, so I took another position scanning books.

Scanning books is a task one might find to be fairly monotonous, but one of my strengths, possibly because of the Asperger syndrome, is I don’t get bored with repetitive tasks. In fact, I love them. I started out a bit slow but refined my technique each day and would go home to think about how I could do things quicker. The quota is set for 3,000 scans each week, but I put my all into hitting 4,000 or more.

On top of scanning the books I also put them out on the store floor. With help from a co-worker, we organize the books department — removing the books that have been there for a while and straightening and getting new books out. This has really improved the store's sales in our book department. I have turned our book department around and am very happy to be helping in this capacity. I look forward to improving each week by examining my progress and, of course, taking feedback. 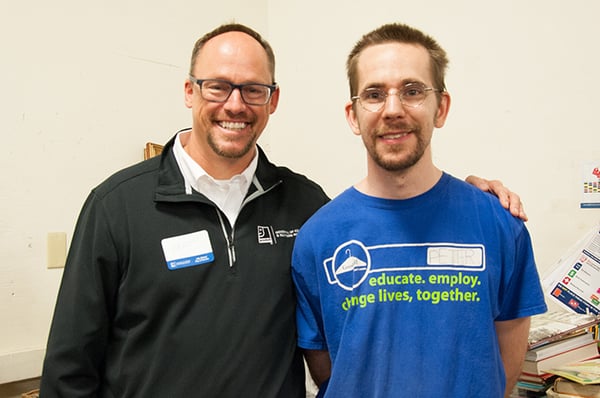 The accommodations I needed for my job are small potatoes in the grand scheme of things but they mean a lot to me and I truly enjoy helping here. Goodwill has turned my life around and in return, I do everything I can to give back. I’ve only been here for one year but I look forward to many more.

Note from the store's manager: When I took over the College Park store, I soon realized there was no consistency in a lot of the areas of the store. The book area caught my immediate attention because it is right in front of the store and the shelves were often empty. Peter, a cart runner, caught my attention. Peter pays a lot of attention to detail and has great customer service. I asked Peter if he was interested in taking over the book area and he told me yes, as long as he could get some training and three days off in a row every week. Our numbers have steadily increased with Peter in the book area. In August, ebooks made $8,217, which is over our total e-commerce budget for the month. Peter scanned a total of 17,155 books in August. Our goal was 10,000. Our August category sales in media/books was up 42%. Peter does all this working 35 hours a week.