In need of support after becoming pregnant, Jaquala Berry reached out to Goodwill’s Nurse-Family Partnership®, a program that pairs first-time, low-income mothers with a registered nurse who teaches them skills to create a happy and healthy environment for their children, up to the age of 2. Nurse home visitors also connect moms with other resources to help them increase their independence, which is how Jaquala learned about The Excel Center®, Goodwill’s adult high school.

“My motivation to go back to school was life,” Jaquala said. “Without a high school diploma, you have to settle for jobs that don’t pay much, and it isn’t that great of a route, especially if you have children. You have to reevaluate and aim higher.”

Jaquala’s desire to aim higher pushed her to enroll. Though her pregnancy prevented her from going to school at times, she never gave up on earning her diploma. In June 2018, Jaquala graduated from The Excel Center at 26 years old. She also earned an industry-recognized certification, which has helped her gain an understanding of the different levels of customer service. 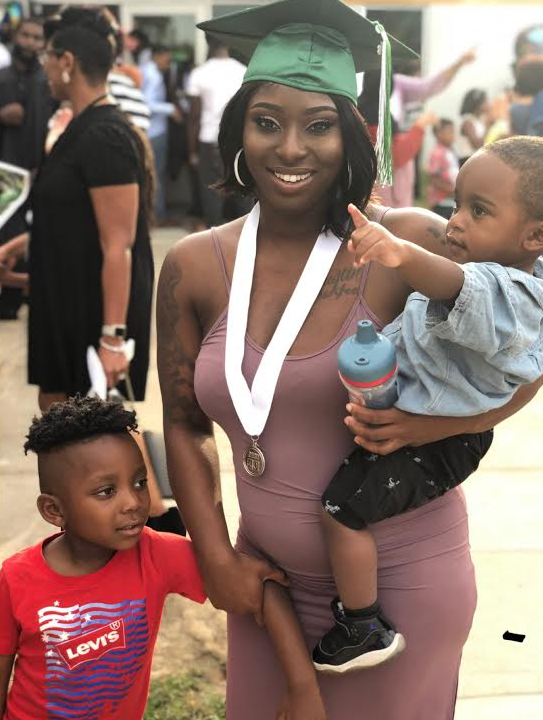 Jaquala is grateful for the continued support she was given throughout her time at The Excel Center. The teachers were always willing to inspire her each day. The overwhelming support gave her the push she needed to finish school.

“One held my oldest child on her hip during class as she was teaching,” Jaquala said. “She didn’t have to do that. She could’ve said he isn’t allowed in here.” “If they know how bad you want it, they will help you along the way.”

Jaquala is proud that her children were able to watch her walk across the stage. She believes watching her graduate will inspire them to succeed academically in the future. Jaquala plans to start classes at Ivy Tech soon. She hopes to become a registered nurse one day.

“If anyone is considering attending The Excel Center, it is never too late to start,” Jaquala said. “It will be well worth it.”